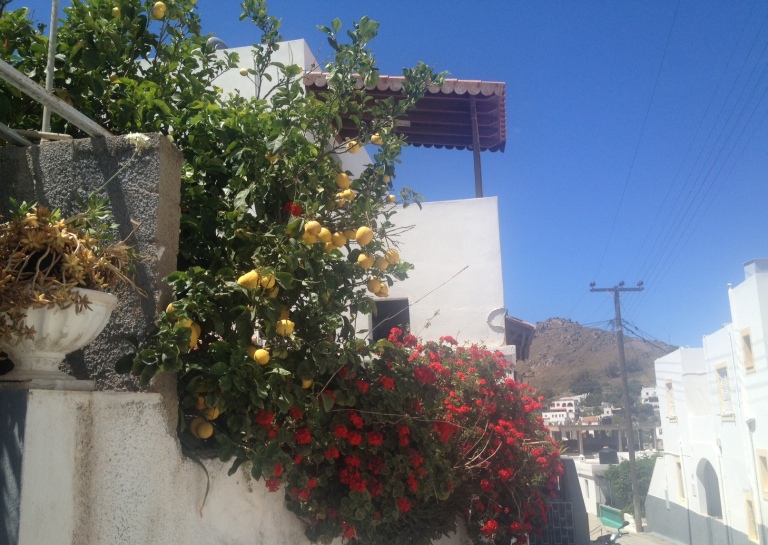 We set off from Leros exactly a week after arriving.  A different Leros from last year with not a refugee in site.  The mayor has had his way and they are all in the ‘hotspot’, concealed in the grounds of the old mental hospital and built especially for the migrants. 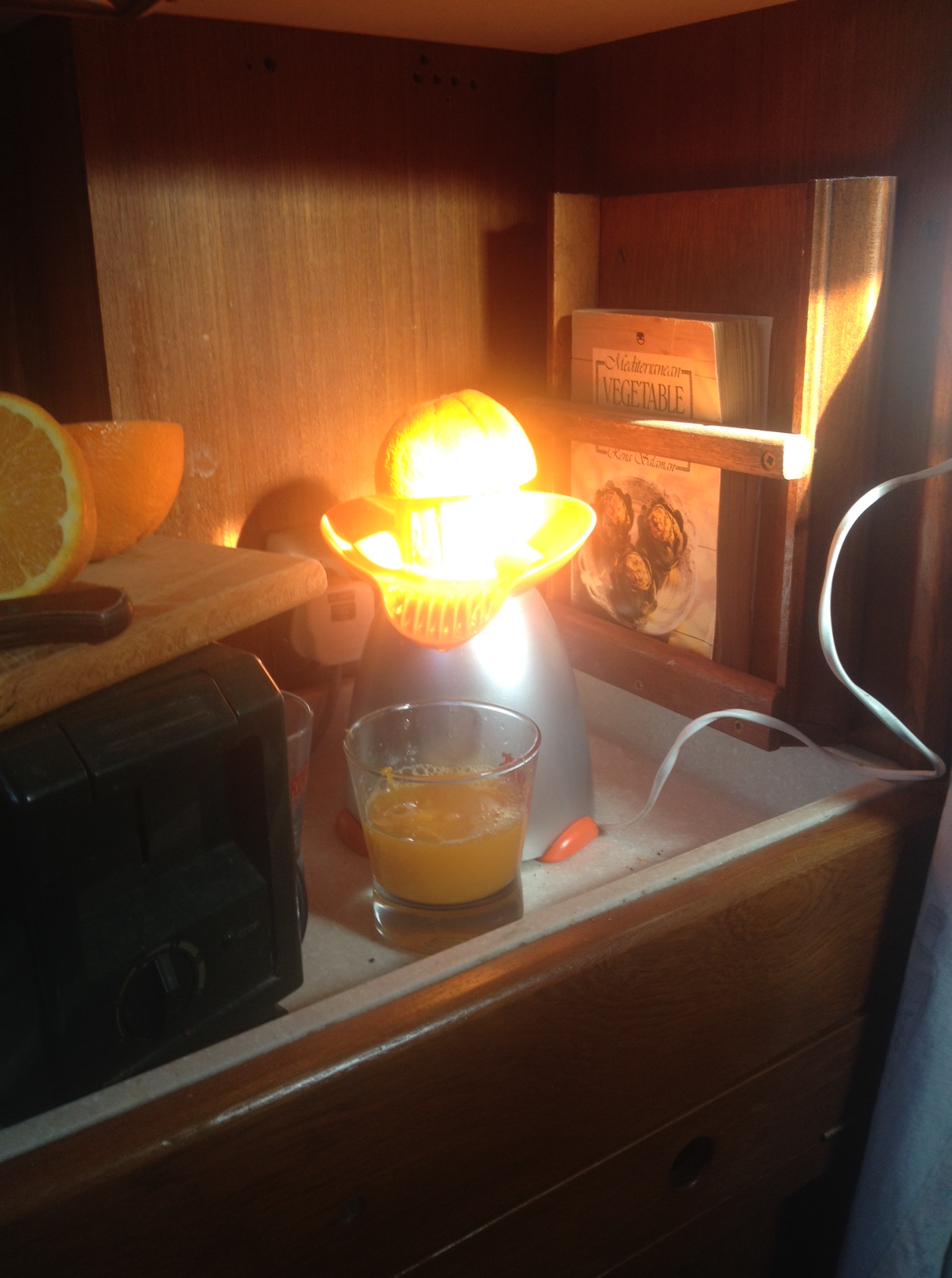 Penguin Orange Juicer back in commission!

Safely out at anchor in the bay we celebrated by visiting the ‘bottle shop’ and buying up a whole load of supplies that the owner kindly brought down to the dinghy by car.  We stayed at anchor one night and left the following morning for Partheni Bay in the north of the island as we had made an arrangement for a diver to come and clean the hull and propeller before setting off for our summer life afloat.  It is Greek Orthodox Easter weekend here and so we decided we would experience it in Patmos.

We are anchored in the bay; other boats are either alongside the pontoon or backed up onto the town quay.  We appear to be isolated and solitary but we both prefer to be free anchored, it’s more private and autonomous. 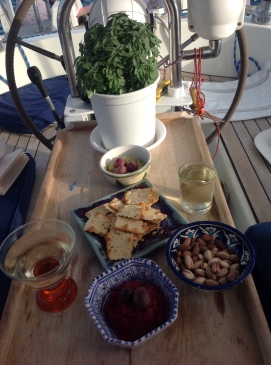 The ceremony of the Holy Wash Bowl was our first event on Maundy Thursday.  It took place in the square of the Chora where the monastery is.  It had been described to me by someone as a ‘presentation’ of the scene in the bible where Christ washes the feet of the ‘students’.  The square was packed, there was a cordoned off area with chairs for important people but as time went on it was clear that there were not enough seats for everyone so it was amusing to watch as people were juggled, de bunked, got offended; eventually there was a place for everyone.  We had walked over paving stones scattered with branches of sweet smelling herbs, lavender and rosemary, releasing the glorious scent into the air as we trod.  Eventually the singing started and down from the monastery processed the monks swinging incense.  Six at a time they came and then we got the drift, there were four monks as close protection to the two who were representing the ‘students’ or apostles.  So it took quite some time for the twelve to assemble.  The apostles were quite ancient and wore big thick black shoes, maybe they were Doc Martens.  Eventually everyone was assembled and the ceremony began but we were abruptly brought back into the present century as a strange noise infiltrated our senses, high up in the sky – a DRONE!!!  The audience was lost, concentration interrupted as they gazed heavenward to the unholy interloper; it hummed steadily onwards filming the proceedings and eventually disappeared.

It was hot and tiring standing watching this process so I’m sorry to say that we didn’t wait to see if the footwear was removed for the washing but went instead to have a coffee and gaze at the view.  This is a really a stunning island, so many bays and indents, I think I read somewhere it described as ‘lacy’! It’s an ideal holiday spot. Everywhere your senses are alive with the smell of herbs, the sight of fluorescent red geraniums, the fat yellow lemons, the white washed buildings and alleyways, the feel of the sun on skin and the sound of birds.  We have made many walks; one up to the Kastelli where we came across a sweet little chapel.  Now this is miles up on top of a hill, difficult access but it was freshly painted white, set in its own glorious garden of blossoming oleander and other plants and fenced off from the goats, I guess that’s why it looked so lush.  Inside there was a candle burning so someone had been here recently, even in this out of the way place.  On the way down, the correct way this time, rather than a scramble and a curse, we passed a small holding, solar panels on the roof, a well , olive trees, vines, hens – all looked idyllic.

There is a Cruise liner alongside the harbour wall, not a really big one but even it dwarfs the town.  You could get many little Patmian houses inside of it.

At last, on this our third visit to Patmos we visited the cave of John the Theologian, where Revelations were supposedly written while he was in exile here from Rome.   Inside, the few people that were there appeared to be Indonesian and Korean, and  were standing in awe before the sacred images;  some in deep meditation others in a trance like state and showing a fervent ardour only evident in the most recent converts to Christianity and certainly lacking in the general  Greek population whose Orthodoxy is so deeply ingrained by centuries of tradition that they need do nothing but dress up, light candles, wish each other Happy Easter, throw firecrackers and let off fireworks at midnight.  Christ is risen! Sacrificial lambs are roasting on the spit!  It’s time for feasting and celebration! 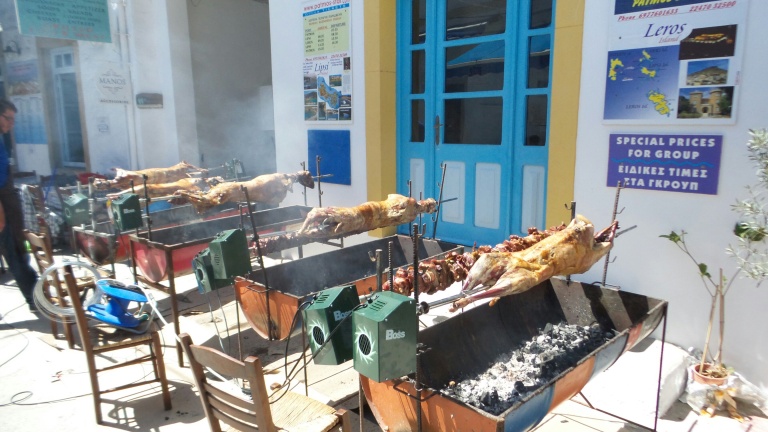 Tomorrow we set off for Turkey, a pork free zone, so guess what is on the menu tonight?  Andy will forsake the sacrificial for the porker!     May 1st 2016